Legend has it that the original minbar stood upon by the Prophet Muhammed (peace be upon him) to address his disciples was the trunk of a Date Palm. Nowadays, the minbar in mosques takes the form of a pulpit similar to those in Christian churches and is used by the Imam to deliver his sermon.

In Ancient Egypt: paintbrushes used in funeral painting were made from fibres obtained from bruising sections of the rib or rachis of Date Palm leaves until rough bristles were formed.he Dom Palm was also a symbol of the Egyptian god Min, who was related to the palm tree through fertility symbolism. In two tombs from the New Kingdom, bounteous granaries are decorated with Dom Palms, which thus signify the divine «donor of food and all herbs».

In Ancient Egypt: The Dom Palm (Hyphaene thebaica) was the symbol of masculinity in nature, and represented Thot, the god of wisdom and science who invented writing. The connection with the moon also made Thot “the Master of Time” and “the Counter of Years”. Therefore, as well as Date Palm leaves, those from the Dom Palm were used as writing utensils.

In Ancient Egypt: the rachis or rib of a Date Palm leaf, with its carved grooves, was also the symbol of the god of eternity, Heh (Hah, Huh), who carried one in each hand. He is sometimes shown holding two palm fronds above his head, which are used to signify the renpet (year). There are also representations of the god Thoth making grooves in the rachis of a palm leaf. 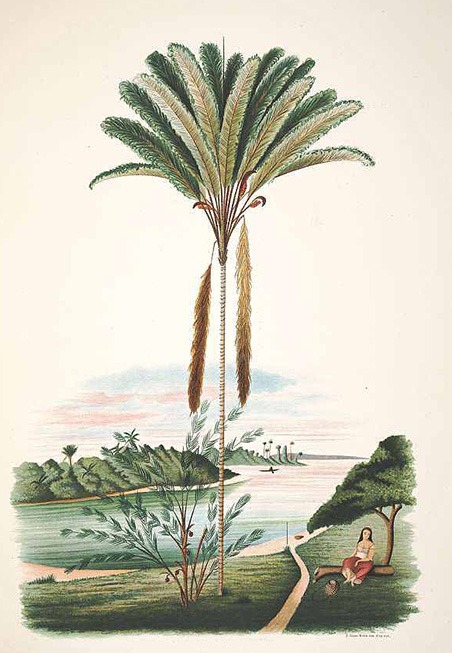 POvid’s version of the foundation of Rome has it that shortly before they were born, Romulus and Remus, sons of the Vestal Virgin Rhea Silvia and the god of war Mars, appeared before their mother in a dream in the form of Date Palms with magnificent branches raised towards the sky. This was taken as a symbol of a grand future for Rome.

The origin of the famous sign used for pharmacies may have its roots in the legend of the terrible plague which devastated Rome in the year 291 BC. News spread of the Greek god Esculapio’s miraculous curing powers, and the Romans decided to send a delegation to his famous sanctuary in Epidauros to beg for the loan of his wise, old snake which, since time immemorial, had accompanied the divine doctor in all his tasks. Esculapio conceded their pleas, and the venerable reptile was carefully carried onto the Romans’ ship. However, as the boat sailed into the Roman port of Antium, the snake escaped and coiled itself around the trunk of a sacred Date Palm. Date seeds are also added to small bags which are supposed to foment male sexual potency and prevent impotence.

Fertility and sexual potency: In some countries, the ingestion of dates is believed to improve fertility and heighten male sexual potency. However, as this is not demonstrated, it is only mentioned here out of interest.

The Palm (Phoenix dactylifera L.): Its fruit is used as medicine for bronchitis, bladder conditions and all types of inflammation. Such medicine is best taken as a concoction made by boiling 25 grams of stoned and crushed dates in half a litre of water for 25 minutes. Dose: Five or more cups per day.

Diapalma was an ointment with secret properties and marvellous powers which was made by alchemists using Date Palm leaves. Date pulp was also an ingredient in another ointment: diaphoenix.

Paul was the first hermit (3rd century). In an account of his life, Saint Jerome wrote “in memory of the saint, Saint Antony always carried Paul’s tunic, which was woven with palm fronds, and wore it on feast days”.

Saint Hierosmos wrote in his biography of Saint Paul that the first Hermit lived in complete solitude, surviving only on the fruit of a palm tree.

We also know that when Saint Dorotheus the Theban was visited by Paladius (his biographer), he had been living in a cave for 60 years and had spent the nights making string with palms and the days collecting stones under the scorching desert sun.

NAPALM, or jellied gasoline, is a variety of highly flammable soap which burns very slowly. When it was originally developed (in 1942), it was made from sodium palmate (NA = sodium and PALM= palmitic), which was a palmitic acid sodium salt. Palmitic acid is a saturated fatty acid (hexadecanoic acid: CH3-(CH2)14-COOH] which is found in large proportions in coconut oil (Cocos nucifera) and palm oil (Elaeis guineensis).

Some writers confirm that Ionic-style capitals may have been inspired in their Babylonian origins by the slender form of the Date Palm.

Other writers maintain that Corinth-style capitals also have their origins in the pinnate leaves of the palm tree. 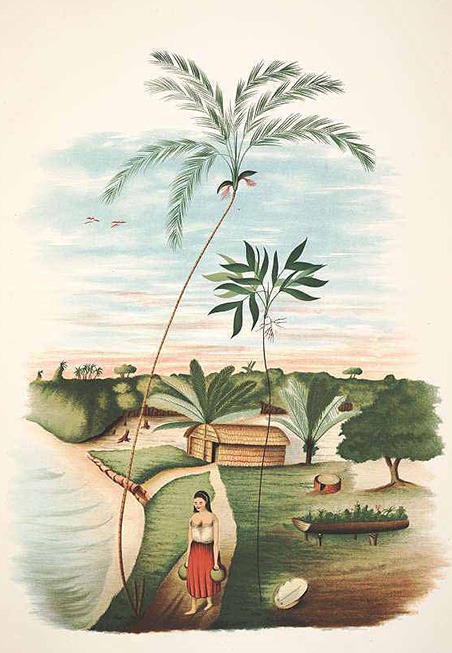 Carl F. P. von Martius, father of the palm trees (1794-1868), said: “… in palmis semper parens juventus. In palmis resurgo”. That is to say “I always feel young when I am near palm trees. The presence of palm trees brings me back to life”.

Alfred Russell Wallace (1823-1913) said: “Ten days of processing a trunk of a Sago Palm (Metroxylon sagu) can supply a man with enough food for one year”.

Carl von Linne (Linnaeus) (1707-1778), said: “Habitat intra Tropicos Palmis Lotophagus. Hospitatur extra Tropicos sub novercante Cerere, carnivorus”: “Man’s habitat is located amongst the tropics of the planet where the fruits of the palm live. He survives in other parts of the world, where he must feed on cereals and meat”.